A little bit of trivia

Yesterday I had occasion to put a dollar coin in a parking meter in our central business district.

The coin dropped through.  I tried again but again it dropped through.
I picked up the coin to check it and it turned out to be a New Zealand coin so I found another that it would accept.

As we walked down the street I idly commented to my husband that the coin must have been the wrong weight so the meter wouldn't accept it.

That prompted him to remember back to the days he worked for the PMG (Post Master General) in Numurkah, Victoria in the late 1960s.

He said he had to go around all the phone booths in town and call the operator and test their ability to know what coins were dropped into the slots by sound! 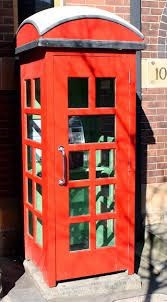 He had to carry around all coin denominations and once he had the operator on the line he would insert coins randomly and the operator would have to tell him whether the coin was a five, ten, twenty or fifty cents by the sound the coin made as it dropped.

He said he also had to carry metal washers with him and insert one at random to see if the operator could tell.

Some would say "that wasn't a coin" whereas others would name a coin they thought it was.

I was amazed.  I didn't know that was done.

Email ThisBlogThis!Share to TwitterShare to FacebookShare to Pinterest
Labels: trivia