Farewell to a beautiful lady

On the 14th of December 2011 I received a comment on my family history blog from a lady named Brigid Simpson.  I had nearly given up hope of finding other family members interested in putting together more of our family's story.

Brigid was a third cousin and I will forever be grateful to her and her sister Mary for the opportunity to see what our common great great grandmother, Alice Morgan nee Kelly, looked like.

Photos were even sent of my great grandmother, Mary Agnes Adams nee Morgan, in her youth and her brothers and sisters.

Brigid was as excited as I was about being able to share our stories and photos.

In December 2013 I was so saddened to be told that this beautiful lady was losing her six month battle with melanoma. She died on the 7th of January 2014.

When my mum died in 2012 Brigid said to me that it was always hard to lose your mum no matter what her age. How right she was.  I feel for her boys.

I wanted to pay tribute to Brigid and her contribution to our ancestral stories so her husband Paul has kindly shared here Brigid's eulogy and a tribute by their sons rugby team, the London Wasps.

In lieu of flowers Brigid's family requested donations be made to their nominated charity Carers, UK

I dearly wish I could have met her in person.  I am so sorry for your loss Paul, Joe, Michael and Mary, Frances and Stuart.

Until we do finally meet Rest In Peace Brigid, I will always remember you. 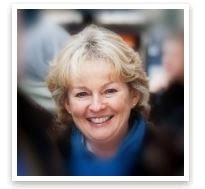 Brigid was a beautiful and remarkable person.  Her warm smile lit up the room and lit up my life.  And looking around me now, how she would have enjoyed today.  Brigid loved this Abbey, with the beautiful flowers, and she loved St Benedict's too.  It was the only school our boys ever attended.  Bennies has been a major part of our lives.  She would have certainly loved the magnificent music, but most of all, she would have been so thrilled to see you all here.  If Brigid were here I imagine that she would thank each one of you for coming, whether you've walked from just around the corner or flown from NZ or Australia.  Brigid would thank you for what you've done for all of us.

The love and support shown to all of us over the last six months, and especially today, is overwhelming.  Brigid would want to thank everyone - gratitude came very easily to Brigid.  I also imagine that Brigid would ask you about you; and she would actually listen to your answer.  I also suspect that for some of you, she'd have some plans in mind too - and probably help you hatch them.  Brigid's interest in people is one of her defining characteristics.  It's one reason we felt special in her company - she made us all feel better about ourselves.

Born and brought up in Cambridge New Zealand, and the youngest of four, I call them the Cambridge four, she had an enviably strong relationship with her siblings.  Fra and Stuart have come over from New Zealand in last few months and Fra is here now, and the extraordinary Mary has been ever-present at our side, suspending her life to share our 24/7 vigil at Brigid's bedside for weeks and weeks.  Thank you Mary.

In our home life Brigid provided the basis for our standards, values and behaviours.  One girl outnumbered by three boisterous boys - she didn't always get her own way, but we always knew what she wanted. (Actually she usually did get her own way!)  She was forever kind, caring and thoughtful, artfully and lovingly steering us to be better people.  She was the architect of our family - I am still a work in progress but she has done a wonderful job on Joseph and Michael.  Brigid was immensely and justifiably proud of you; you are a credit to your Mother.

Brigid was clearly highly intelligent but more tellingly always a wise-head.  Calm, strong, clear-thinking.  All obvious qualities for her work as a doctor or medico-legal adviser, but far more often brought to bear in her relationships with family and friends.  She has always been my counsel and, when I'm ever in need in the future, I will always think "what would Brigid do?"

Brigid was great to be around. Life-enhancing, warm, positive, mischievous, energetic – she was my best friend and, having read so many wonderful sympathy cards, for many of you, she was your best friend too.

I must also mention her courage over the last six months. Brigid consciously decided she would not “battle with cancer” – she did not want her body to be a battleground. She was not stoic in the sense of a stiff-upper lip, instead of battling her cancer she faced her fate with a humble acceptance. She accepted her illness and was grateful for what she had. She didn’t cry or feel self-pity she feasted, drank champagne, laughed – and she kept our spirits high (we are the ones who did the crying). I have wondered how she did it. One day in a Royal Marsden Hospital waiting room, I read an article about courage that concluded “Courage is a quality of morality and character much more than muscle and balls”. And I think that’s about right; she had faith, morality and character in abundance.

I am very proud of Brigid, I love her and admire her. I am privileged to have shared 30 years together (the 30th anniversary of our first meeting was last Tuesday). I will miss her deeply every day of my life.

Below is a transcription of their tribute from the London Wasps programme. 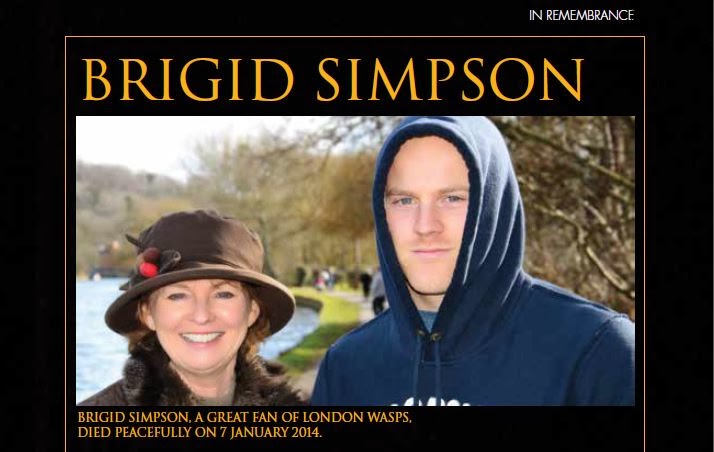 After qualifying as a doctor, Brigid left New Zealand in 1982 to see the world and, in her words, “to get away from rugby, racing and beer.” That didn’t last
long. She met Paul, a keen rugby player who’s known to like a beer. A year later they married, then moved to Sydney, Australia with Paul’s job.

Joe, her first son, was born in Sydney and Michael born two years later after Brigid and Paul returned home to England in 1990. The boys attended St
Benedict’s School in Ealing where they first played rugby. Both boys were part of Wasps Academy system from age 15; both represented Middlesex, London & South East Division and both played England age group rugby.

Brigid and Paul barely have ever missed a game; home or away, Brigid could usually be found pacing the touchline supporting her beloved boys (and praying for an injury-free game). If you’ve ever seen Joe make a searing break and heard a lady scream “Go, Jum’, Go!”, that would have been Brigid!

Brigid was diagnosed with malignant melanoma last June. She bore her illness with extraordinary courage and at no time did she complain or despair.
She continued to spend more time thinking of others rather than herself and was deeply grateful for the love and support provided by family and friends, particularly in those last few difficult months.

She listened to the Radio Devon radio broadcast of Wasps’ heroic win against Exeter from her hospital bed. Within a couple of hours of the final whistle, Joe
re-joined the family at her bedside, and she died just 36 hours later on Tuesday morning.

Brigid will be sadly missed.