Today is the anniversary of the death of Joseph Hulme, my maternal great great grandfather.
He was born 1843 Putney, Surrey, England and died on the 3rd of October, 1920 at Milawa, Victoria, Australia aged 77 years.
His wife had predeceased him by twelve years.
Parents William Cluff Hulme and Hepzibah nee Land arrived in Australia from London on the 5th of January 1862 aboard the ship Blue Jacket but Joseph doesn't seem to be on that passenger list so I am still searching for his arrival.
He married Anna Dorothea nee Bartsch at Beechworth on the 16th of March 1875 and they farmed for many years at Horseshoe Creek, near Moyhu, Victoria and their farm may have been called Putney Park. 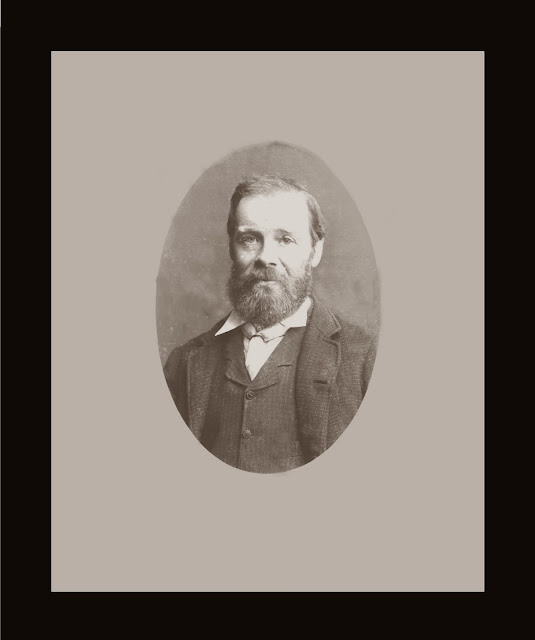 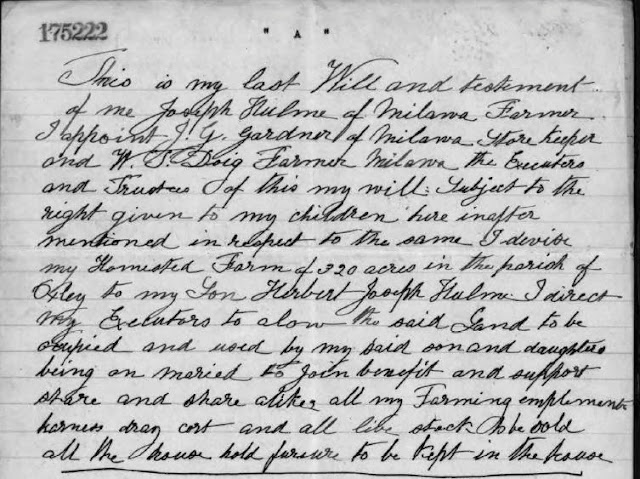 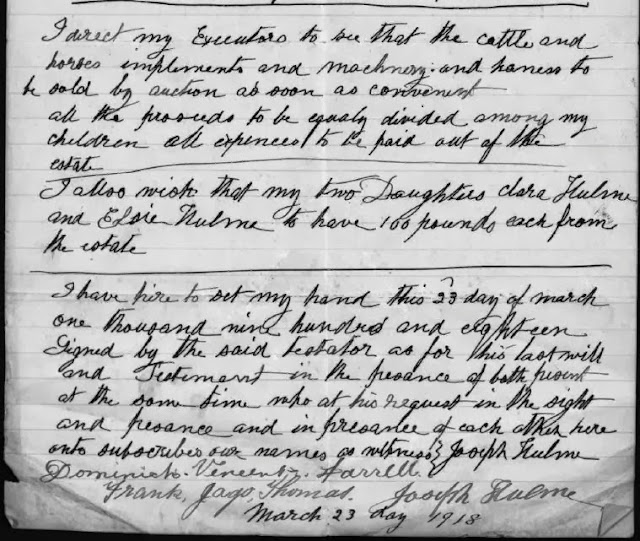 This is my last Will and testament of me Joseph Hulme of Milawa Farmer.
I appoint J.G. Gardner of Milawa store keeper and W.T. Doig farmer Milawa the executors and trustees of this my will.  Subject to the right given to my children here in after mentioned in respect to the same I devise my Homested (sic) Farm of 320 acres in the parish of Oxley to my son Herbert Joseph Hulme.  I direct my Executors to alow (sic) the said land to be occupied and used by my said son and daughter being on maried (unmarried?) to join benefit and support share and share alike all my farming implements harness dray cart and all live stock to be sold all the house hold furniture? to be kept in the house.

I direct my Executors to see that the cattle and horses implements and machinery and harness to be sold by auction as soon as convenient.  All the proceeds to be equaly divided among my children all expenses to be paid out of the estate.

I also wish that my two Daughters Clara Hulme and Elise Hulme to have 100 pounds each from the estate.

I have hereto set my hand this 23 day of March one thousand nine hundred and eighteen
Signed by the said testator as for this last will and testament in the presence of both present at the same time who at his request in the sight and presence and in presence of earch other here unto subscribes? our names as witness.  Joseph Hulme
Dominicho? Vincent? Farrell
Frank, Jago, Thomas.  Joseph Hulme March 23 day 1918