Albert Henry Percival Fleming, service number 24, enlisted on the 15th of August 1914 into the 5th Battalion's A company.

The 5th Battalion was among the first infantry units raised for the AIF during the First World War. Like the 6th, 7th and 8th Battalions it was recruited from Victoria and, together with these battalions, formed the 2nd Brigade.
The battalion was raised within a fortnight of the declaration of war in August 1914 and embarked just two months later... read more

Fleming was recommended for the Mililtary Cross by G.O.C 2nd Australian Infantry Brigade on the 6th of October 1916
"For consistent good work during the period 1/3/16 to 1/10/16.  This Warrant Officer has been a consistent worker right through.  During operations at POZIERES in organizing carrying parties and bringing up ammunition and bombs on many occasions through heavy enemy shelling.  He was of great assistance in the attack".
signed ? Smyth ... Major-General, Commanding 1st Australian Division.

His promotions over the time were as follows:

Wangaratta Chronicle - Wednesday 28 July 1915
The friends of Mr. Alfred Fleming, of King Valley, will be pleased to know that he has been rapidly promoted in the military since he volunteered his services to his King and Country. Mr. Fleming enlisted as a private in the 5th Battalion, Scottish Regiment, and has now attained the rank of Regimental Sergeant Major. He is fighting at the Dardanelles. 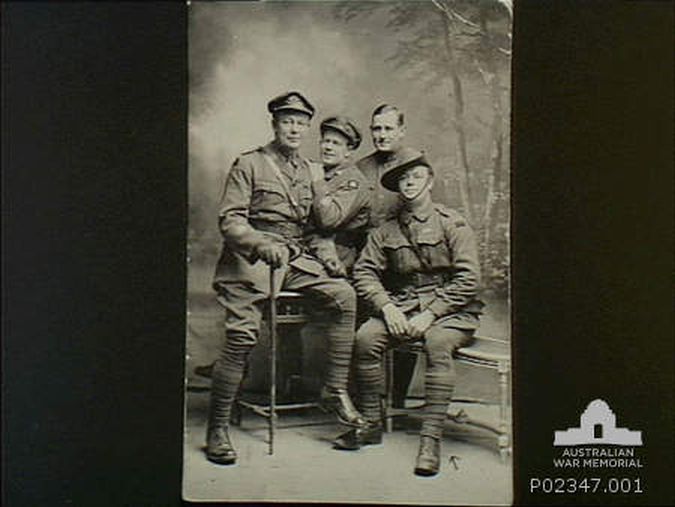 
Wangaratta Chronicle  Dec 14, 1918
King Valley
On Tuesday evening, 10th inst, the King Valley State School was crowded to its fullest extent, whilst almost as many more were forced to remain outside.  The occasion being a welcome to Reg. Sgt-Major A. Fleming and Lance-Cpl F Laffy who have both recently returned from the great European war.  The local residents have indeed reason to be proud of their young men for the fine patriotic spirit they have shown in response to the call of the Motherland.  Sgt-Major Fleming bears the proud title of Anzac, having recently returned on a well  earned home furlough.  His fine physique and soldierly bearing, together with the inevitable smile and jocular manner, mark him as a typical Aussie, the very dread of the boasting Hun.

My Mum's Uncle Albert, known as Alf, was born at Camberwell, Victoria on the 20th of May 1889, the eldest son and the first of eleven children of Donald Fleming and Margaret nee Hart.  My grandfather, Archie Fleming, was his younger brother and child number ten.


The North Eastern Despatch,  Wednesday, November 23, 1910....page 2 - Whitfield
A wood chopping match that is creating a good deal of interest has been arranged to take place on the recreation reserve on Saturday, between Mesrs.  Jack Slater and Alf Fleming.  A stake of 5 pound aside had been lodged.

The North Eastern Despatch,  Wednesday, November 30, 1910....page 3 - Whitfield
The log chopping contest between Messrs. Jack  Slater and Alf Fleming for 5 pound aside attracted a very large attendance on the recreation reserve on Saturday afternoon.  Much interest was taken in the match the log was lying 15 inches in diameter,  and Mr. Isaac Macklin was referee,  Mr. F. Lawson, time-keeper.  The Bobinawarrah man was the first to turn,  but he soon was followed by his opponent who eventually won an exciting contest by a few strokes.  Mr. Fleming was congratulated on his win.  The time was officially given as 58 seconds, and this is only three seconds behind Charles Miley's best.


At his enlistment in 1914 Alf was a tramway employee living at 9 Hotham Street, Collingwood with his wife Margery Marie nee Waters.  He and Margery had 2 children, Alan Percy and a daughter.

After the war he and Margery separated and later both remarried.
Alf married Mary Ann Ostler/Osler in 1927.  They had one son that I know of.