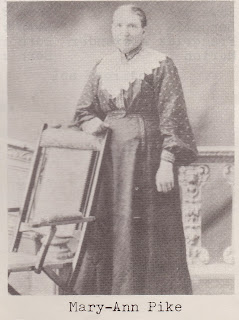 The death occurred at her residence, Euroa, on Friday last, of Mrs Marrian Morgan, one of the oldest and most highly respected residents of the district. The late Mrs Morgan was one of the earliest residents, coming to this district in 1851, with her widowed mother, at the age of four years, and has thus resided here for 82 years. She was born in Loddon district, and had a good recollection of the early days, recalling an occasion, when she resided in the north, her mother had to leave her children and cross the Murray, a mile wide in flood, in a frail boat, to obtain provisions. They did not expect their mother to return safely. After her marriage she resided for many years on a farm a few miles from Euroa, near Mr G. Harrison’s. She raised a large family, four of whom, with her husband, pre-deceased her. Her eldest son, John, was drowned in the Seven Creeks, near the Sydney road bridge, in flood time. For many years the late Mrs Morgan had resided in the town. The possessor of a kindly and genial nature, she held the affection of a large circle of friends and relatives. She leaves an adult family of one daughter (Mrs A. McNay, Yarrawonga), and eight sons, all of whom are well known here and held in high respect. The funeral took place on Sunday last. The graveside service was read by Rev. L. Hume. The pall bearers were Messrs, H., Edward, George and Arch Morgan, S. T. McNay, G. McCoomb and N. McCoomb; the coffin bearers were Messrs G., R., A., J., E., and F. Morgan, and Messrs T., J., and George Morgan jr., acted as flower bearers. Mr T. G. Ferguson carried out the funeral arrangements. 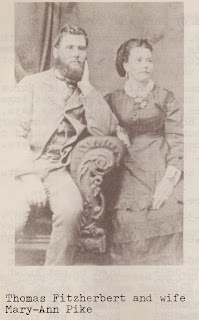 Mary Ann Pike was my maternal great great grandmother.  She was born on May 10 1847 in the district of Murchison, Victoria to parents John Pike and Isabella nee Beaton.

Mary Ann married Thomas Fitzherbert Morgan on the 11th of April 1866 at Euroa.

"Kindly and genial nature" must have run in the family.
Their son, William Thomas Morgan, known as Bill, was my great grandfather.  He died before I was born and I had never thought to ask my mum what he was like.  A few months ago I asked my auntie and she described him as kind and gentle which is also exactly how I would describe his daughter, my grandmother, Daisy.