My step dad gave me a little embroidered postcard he had found and asked if I could trace any family for it.

We would like to try to reunite the postcard with family members.

He couldn't remember exactly where it was found but he thinks it may have been in an opportunity shop he and my mum did voluntary work for before she passed away. 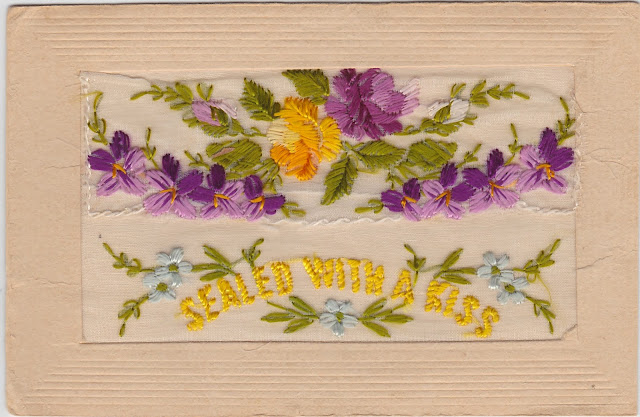 A letter was written on the back by Rowland (Rowlie) Jones and it was sent from France in 1916 to a young girl named Clarice. 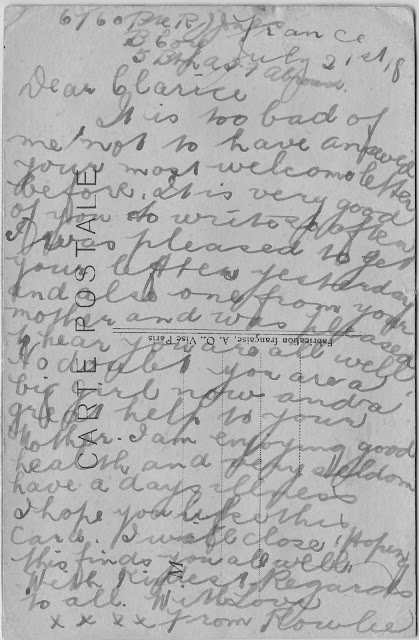 Transcribed as follows:-
6760 Pte R. J. Jones B Coy 5 Btn AIF abroad France July 21st  '18
Dear Clarice
It is too bad of me not to have answered your most welcome letter before.  It is very good of you to write so often.  I was pleased to get your letter yesterday and also one from your mother and was pleased to hear you are all well.  No doubt you are a big girl now and a great help to your mother.  I am enjoying good health and very seldom have a days illness.  I hope you like this card.  I will close. Hope this finds you all well.  With kindest regards to all.
With love xxxx from Rowlie

Thankfully the letter had Rowlies' Battalion and service number so into the Australian War Memorial search where I found his embarkation information and then his war service record in  National Archives.

There I found he was born in 1893 at Milawa, Victoria and next of kin was his father who had the frustratingly common name of David Jones.  Their address was Moyhu, Victoria.

I knew where Moyhu was, my maternal grandmother and her siblings were all born there and funnily enough in later years (1930) my grandmother's eldest sister, whose name was also Clarice, married a David Jones! Our Clarice would have been 13 years old in 1918 and they also lived at Moyhu.
Family friends with perhaps a later connection ...... I wonder?......... perhaps more searching to do there.

Into  Ancestry.com.au, and Trove,  to search for Rowland "Rowlie" J Jones.

In Trove I found this article which disagrees somewhat with his statement to young Clarice that he was enjoying good health: 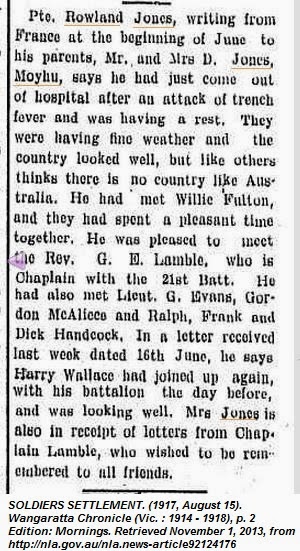 Rowlie was a farmer at Moyhu and after the war he married Isabel Munro.  They farmed at Moyhu for the remainder of their lives.  Isabel died in 1968 and Rowlie lived on until he was 94 years old in 1987.

They are all buried at the Milawa cemetery along with some other of their family members.


If anyone knows of any living family members please let me know.
By Kerryn Taylor - November 23, 2013