New DNA matches are coming in regularly with people who have connections to Morgan families in Derrynoose, Armagh, Northern Ireland which is where my 3rd great-grandparents Alexander Morgan and his wife Ann (Nancy) Lennon are recorded as having children in the 1820s and 1830s.

As the following people are living I can't share too many details for privacy reasons but a recent new DNA match had a father Fred Morgan who lived in Rowan Road.  I haven't found Fred as yet.

Another has a great-grandfather Thomas Morgan from Clontibret, Co. Monaghan which is very close to Rowan and where many Morgan families lived.  DNA matches are also to there but yet to be confirmed and connections found.

In the Griffiths Valuation for Armagh (1864), there was one Alexander Morgan who was leasing land from Andrew J Crawford at Rowan, Derrynoose.  There were quite a few other Morgans in the same area.

I don't doubt they were connected, I just haven't found how as yet.

Alexander's son, my great-grandfather, John Morgan named his Essendon hotel "Cross Keys".
There was an area named Cross Keys only about 5 miles from Derrynoose.
As with Rowan, Cross Keys now just seems to be a road rather than a townland.

John Morgan's first son was named Francis Edward Morgan.  There were 2 Francis Morgans living near Alexander.  It's possible that John named his first born after his own grandfather and his second son was Alexander after his own father.  Not strictly sticking to the traditional naming pattern but fairly close.

As with Rowan, Cross Keys now just seems to be a road rather than a townland I think.

In the 1901 Irish census, taken on the 31 March,  there are 4 Morgan families living at Rowan, Derrynoose. 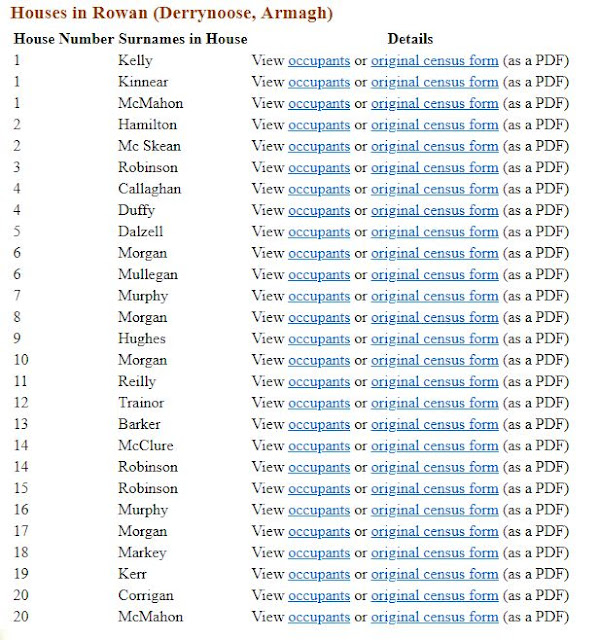 At number 6 Rowan Road was Felix Morgan, aged 50, a farmer who was born in Co. Armagh and not married.  Living with him at the same address was his niece Anne Mullegan, aged 30 also not married.  They were both Roman Catholic and could read and write.

Patrick and Catherine look to have been twins who may not have survived.
Brigid and Patrick also look to be twins born after the 1901 census.

In the 1911 census, the Morgan household is listed as Residents of a house 9 in Rowan (Derrynoose, Armagh)*

Peter and Bridget are now aged 68 and 51.  It states they had eleven children and 9 are living which fits with the baptisms as Bridget and Thos Patk both aged 8 years  (Brigid and Patrick baptised 24 March 1903) also tally with the baptism records. 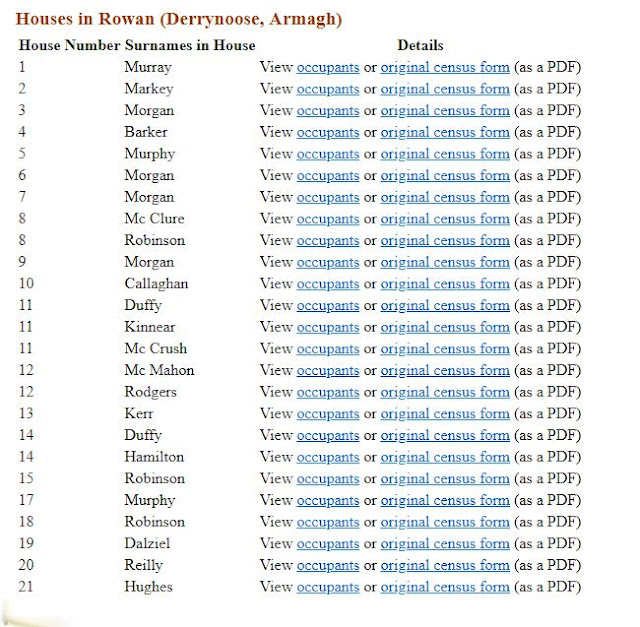 Residents of a house 3 in Rowan (Derrynoose, Armagh)
Felix age 62 is single and living alone.

Residents of a house 9 in Rowan (Derrynoose, Armagh)* see above Peter and Bridget.

Rowan Road is the red marker balloon below.
Image from an early post at
http://morganandkellyfamilyhistories.weebly.com/weeblyblog/morgans-at-rowan-derrynoose-armagh 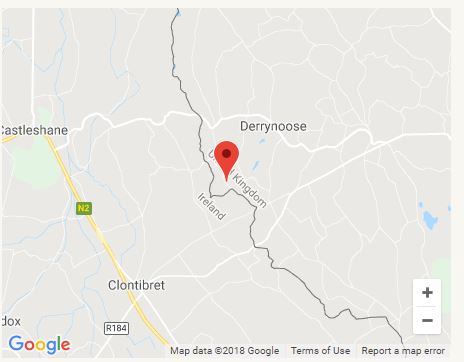 A person's DNA doesn't change but their ethnicity results can as companies update using "improved ways" to analyse the data.

Many people only test to get ethnicity results.  That's their prerogative.
I love finding relatives all over the globe and am lucky to have "met" both in person and virtually, some lovely new cousins and like-minded friends through both paper and genetic genealogy.

I certainly don't have a hope of understanding the technicalities of how it's done but the genetic genealogy experts say ethnicity estimates are just that, estimates.

I think of it as an extra, interesting and even fun addition to my DNA matching for genealogy but I don't take it as gospel even though the results are pretty much what I would have expected from my years of research.
Given that quite a lot of that research has been confirmed through DNA matches I am in agreeance with their "estimates" and find not all that much difference between the results of the companies I have uploaded to.

This is my initial AncestryDNA ethnicity results breakdown and the map. 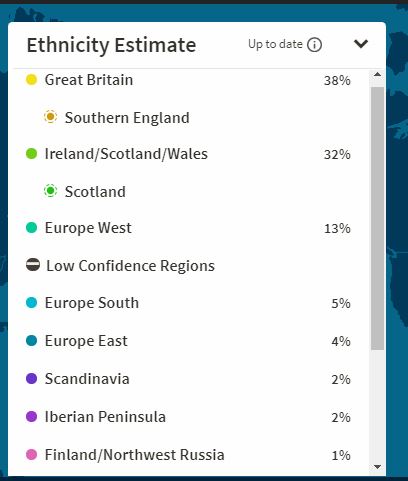 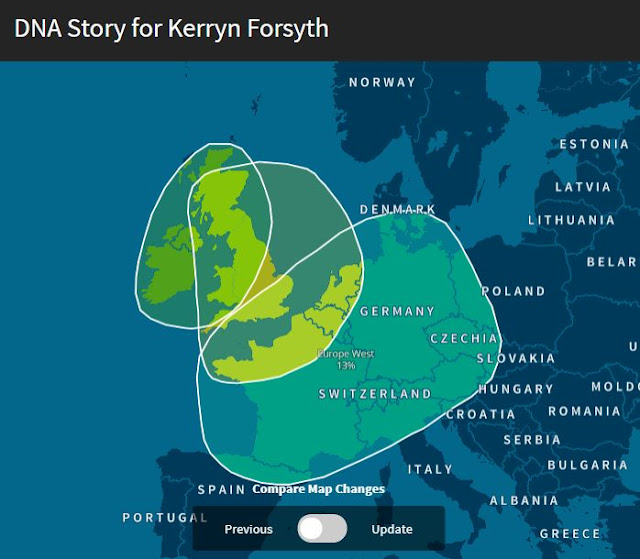 Below is my newly updated breakdown estimate and map: 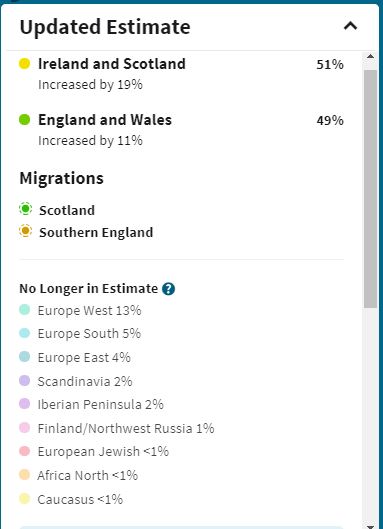 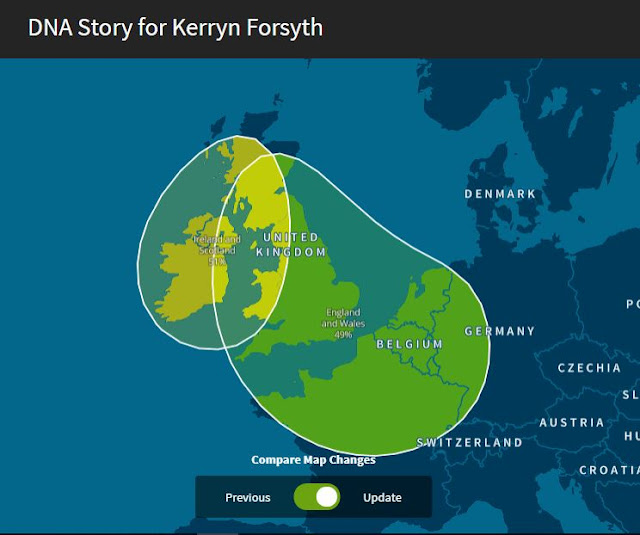 There are also explanations available. 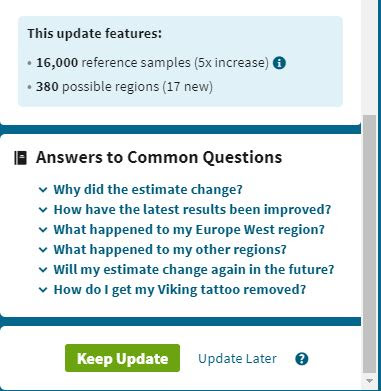 You can read further AncestryDNA FAQs about the updates HERE