Yesterday on the New Zealand Genealogy and History Group I learnt about a couple of brilliant sites that I hadn't previously known about. 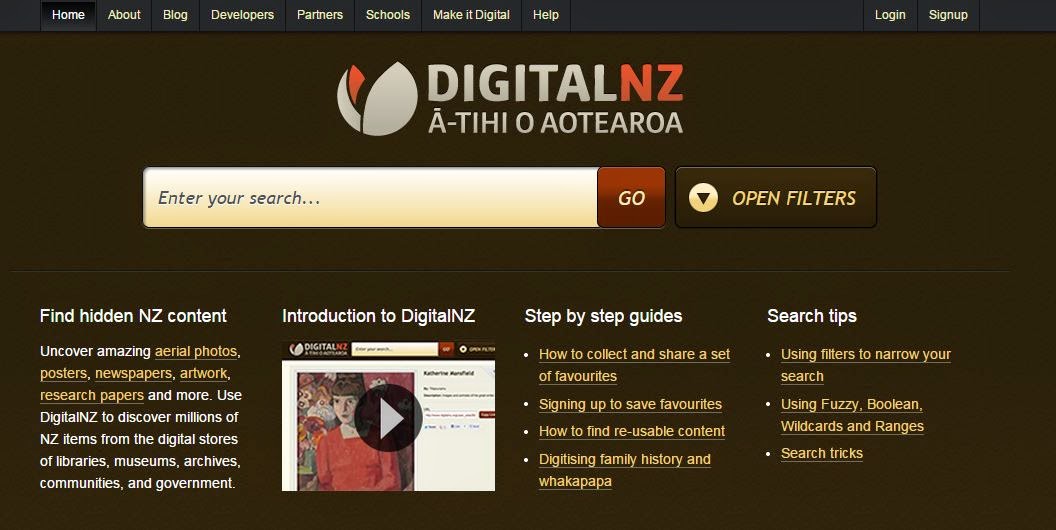 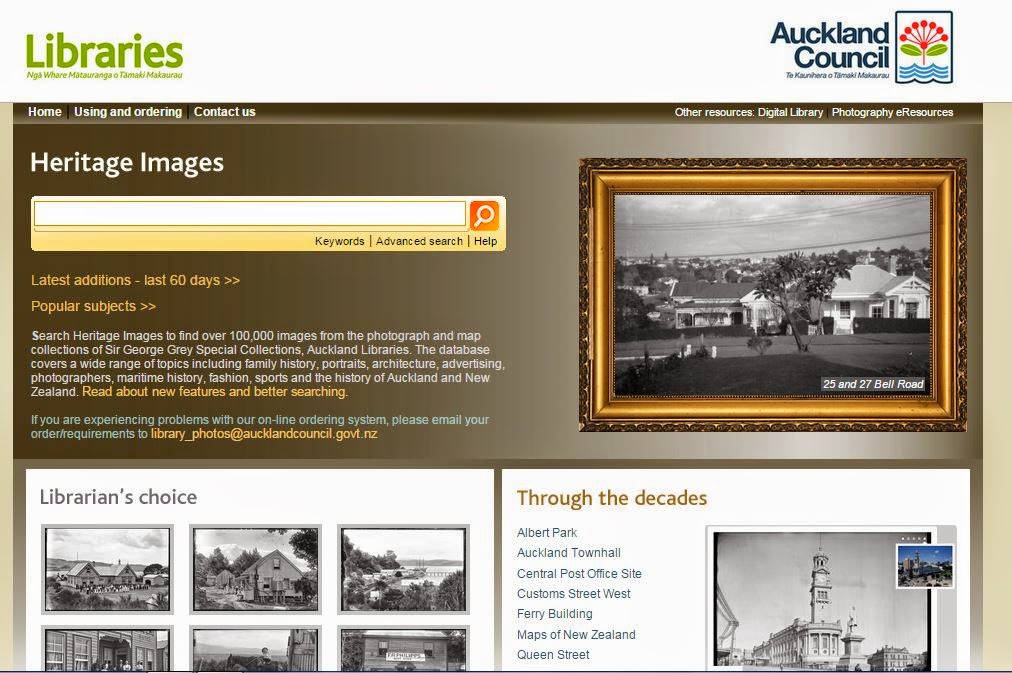 Posted by Kerryn Taylor at 9:37 am No comments:

These photos are in the photo album of my maternal grandmother, Daisy Fleming nee Morgan and I am so thankful that my mum went through and named all the photos with her, even though those stickers are probably not the best idea.

The Pratt and Pigram families were neighbours and friends of my maternal grandparents, Daisy and Archie Fleming

They were farmers living at Edi Upper in the King Valley, North Eastern Victoria.

They were still listed as living there in the 1980 electoral roll. 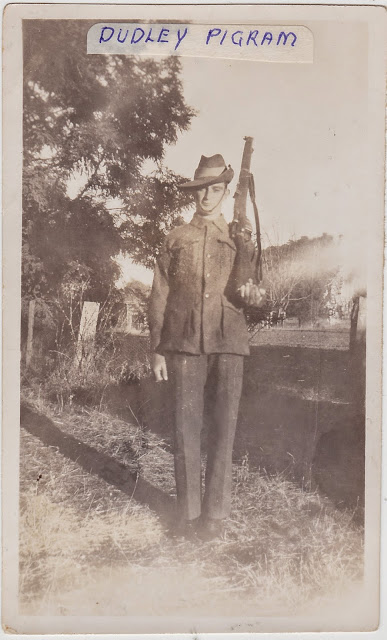 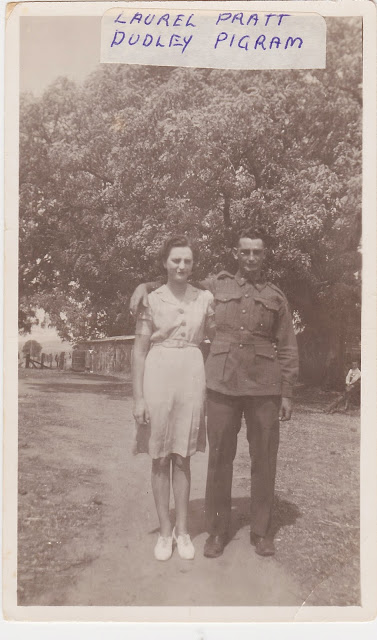 I'm fairly sure that Laurel and Dudley were brother and sister.

Laurel married Charles Alexander Pratt and they had a son named Carl John Pratt about 1952.

I remember mum telling me that Carl was killed in a car accident.  He died in 1969. 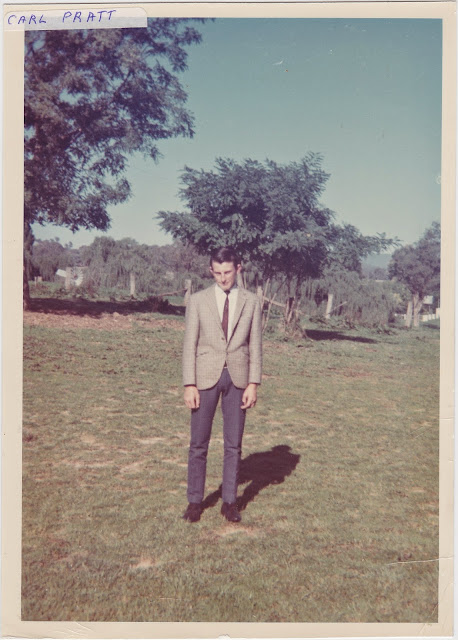 There are two other photos, one of Billy Pratt with his car, what looks like an EH Holden, and one of Louise Pratt.  I haven't added those photos as they could be still living.
I think they are Carl's brother and sister.

I'm not sure if the photo below is the same Billy Pratt or not. 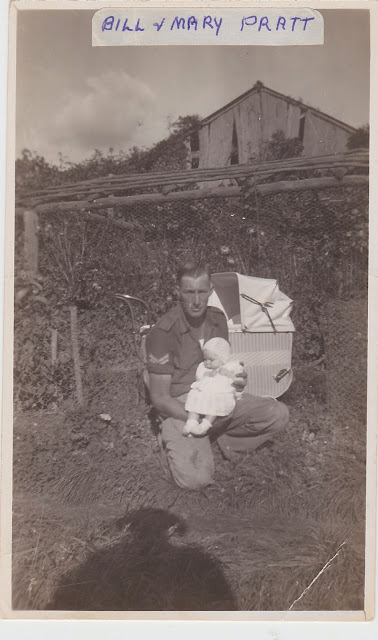 Posted by Kerryn Taylor at 9:26 pm No comments:

Miners in the family

Reposting this for Workday Wednesday daily blogging prompt
Original Sepia Saturday post with comments on my Wordpress Blog
Three of my great great grand uncles, Michael, Thomas and William Kelly, were miners.
They were brothers of my great great grandmother, Alice Morgan nee Kelly (1834-1904)
Their parents were Cornelius Kelly and Mary Moloughney of Dualla, Tipperary, Ireland.
Michael was born there in 1836, Thomas in 1843 and William in 1846.
Michael went to Kimberley, South Africa and I am presuming he was a miner there as he did very well for himself. 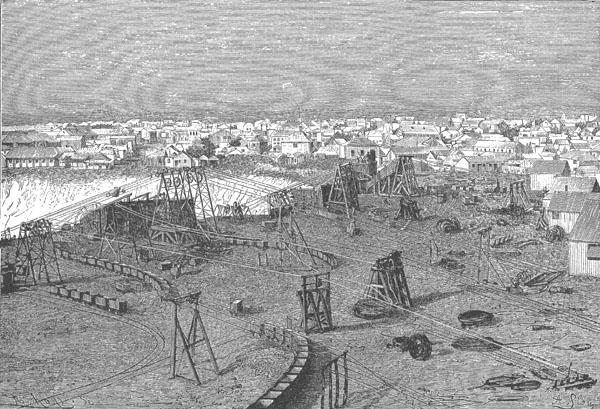 Kimberley and its diamond minehttp://afinitas.org/Watson/RevJohnDD/Kimberley.htm 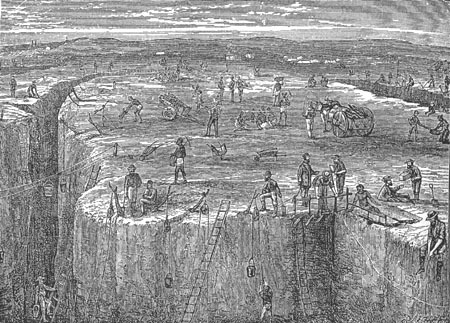 Diamond Mine, Kimberley       http://afinitas.org/Watson/RevJohnDD/Kimberley.htm
Michael contracted tuberculosis and came to his sister, Alice,  at the Cross Keys Hotel Essendon  in Victoria,  Australia where he died of the disease six months later in April 1898.
In his Will he left quite a lot of money to family members.
Michael’s Will can be read here.

Michael’s younger brother,  Thomas Kelly  migrated to Australia in 1858 at only 13 years of age along with two other brothers, John  and William.
They arrived  just in time for their sister’s wedding that same year.
Thomas then moved on to New Zealand, obviously drawn by the gold rushes there.
He also did well from mining.

Thomas Kelly
The above photo is courtesy of the late Brigid Simpson and her sister Mary.
Thomas was one of three men involved in “Noble’s Rush”  on the Grey River , South Island of New Zealand.
Robert Noble was granted the prospector’s claim on a tributary creek of the Big Grey, just above Mackley’s station: five hundred men were there to see Noble’s party of three win seventeen pounds’ weight of gold in their first week’s wash up; 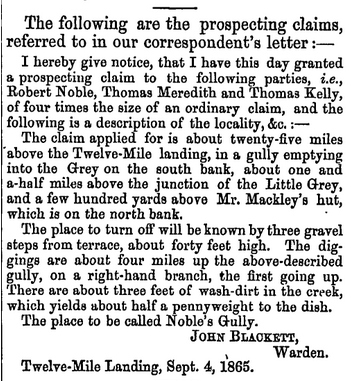 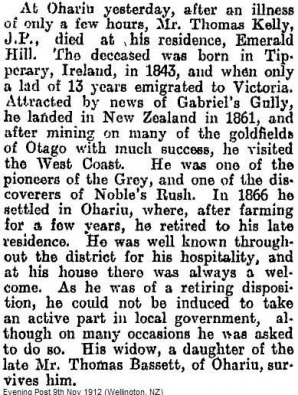 William Kelly was much harder to find but mention in his brother Michael’s Will states he was a “speculator” for West Australian Mining.
Apparently a “speculator” is another term for a miner.
The only William Kelly I could find on further searching was the death of a William Kelly in 1899 in Queensland.
His parents were named as Con Kelly and Mary O’Loughlin.
I’m told the surname Moloughney is pronounced with the ‘gh’ as MolloKney which I have read is also interchangeable with McLaughlin etc.
William’s occupation was miner.
~~~~~~~~
I’m lucky to have a couple of little books written years ago by family members about their experiences in the Australian goldfields.
In about 1891 my maternal 3rd great grand uncle, Edward Hulme,  wrote a small book  called “A sketch of Life”.
It was an account of his emigration from England to Australia and in it there are a couple of paragraphs about his mining experience and even an account of his “200 mile tramp through the bush” which was from Melbourne to the Beechworth goldfields.

Agnes Mason and Peter Hart
Peter was a miner for a while at Talbot in Victoria.
Agnes was the daughter of Peter Webster Mason and Margaret Leslie Mason nee Carstairs from Scotland.
The following is an excerpt from George Rathbone’s book
“Peter Webster Mason, his wife Margaret and family travelled the gold escort route to Ballarat. There they became friends with William Rathbone and the Martin brothers James, his wife Virtue and their baby son Isaac. Baby Isaac died somewhere along the inhospitable track. Isaac Martin and his wife Jean (nee Cromers).  William Rathbone later  married Elizabeth Martin, James Martin’s sister.
In the early years so scarce were women on the goldfields that at the appearance of one, the miners would shout “there’s a woman”. So the Mason and Martin families were drawn together for comfort and refuge.
None of the friends had any great gold finds, only sufficient to satisfy their needs.
The families were fortunately away from the Ballarat goldfields at the time of the Eureka Stockade.
~~~~~~~~

William Finlay Fleming
My maternal great great grandfather, William Finlay Fleming had also tried his luck at mining.
He started mining at the Bendigo and Clunes district of Victoria.
Although he was not very successful he secured one fine nugget which turned the scale at 3lbs 2oz.
He moved on to farming after about 18 years on the gold fields,

Posted by Kerryn Taylor at 12:30 am No comments:

Margaret Duncan was born at Lintrathen, Angus, Scotland in 1877

Henry Elkannah Taylor was born at Bungaree, Victoria, Australia in 1877

They married at Clarke's Hill, Victoria in 1899. 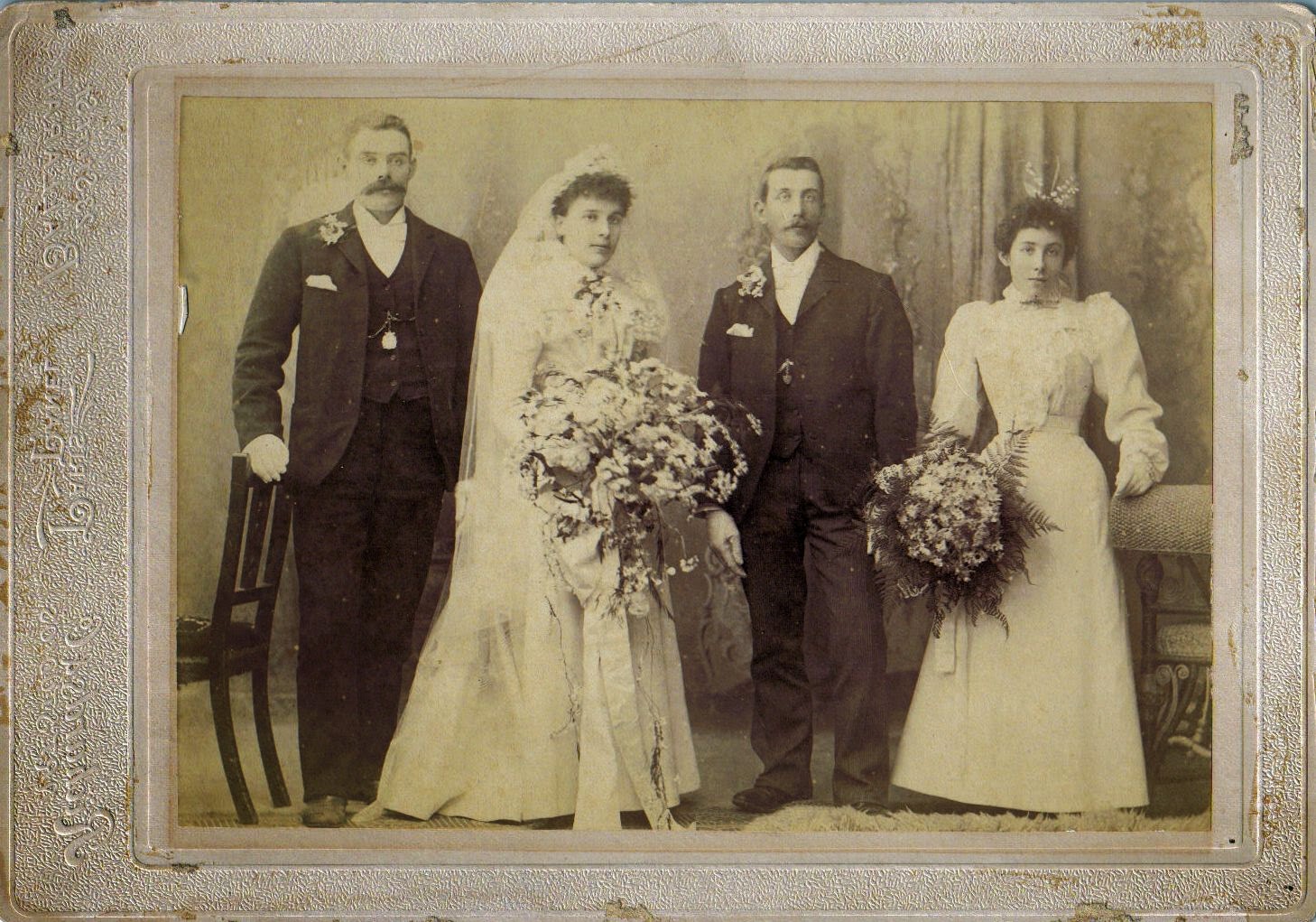 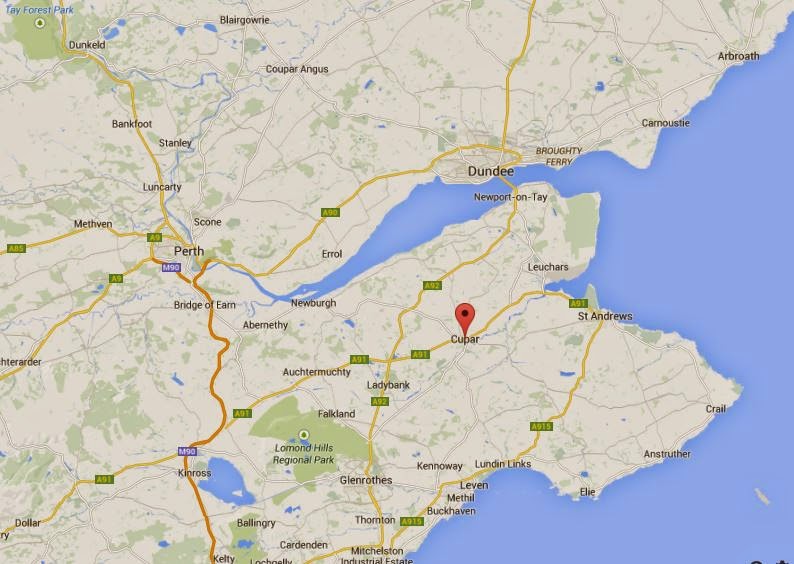 Her parents were Andrew Carstairs and Elizabeth (Betty) Stewart.

"Were contracted Peter Mason in this parish and Margaret Carstairs in the parish of Cupar who after proclamation without objection were married the 15th of same."

Peter and Margaret Mason sailed from Plymouth aboard  the "Cheapside"  on the 21st of May, 1848 and reached Port Phillip on the 18th of August, 1848 as assisted immigrants with children Andrew aged 2 and Susan aged 3 months.  This was the fastest voyage to that time.
Fare was 14 pounds 8 shillings.  196 passengers.  Peter was passenger 121.

Peter and Margaret could read and write and went ashore without leaving their address.

The Port Phillip Patriot and Morning Advertiser of 19 August reported:-
" The Cheapside arrived here yesterday, with emigrants from London and Plymouth, having completed the voyage in rather less that 88 days, being the quickest ever yet made from England to Port Phillip.
She brings London papers up to the date she sailed from Plymouth, 21st May as she left during the night of that day.  The class of emigrants on board appears to be as good as those brought by the "Cornwall" being almost all from England.  The passage of this vessel throughout has been generally favourable.  She ran to Madeira in 7 days, and was off the Cape of Good Hope on the 20th July, from that to Cape Northumberland she experienced a succession of strong gales from the North, on the 25th July especially, a severe storm arose accompanied with lightening and rain, she was struck by the electric fluid, but it was carried over the tide by the conductors, having done no injury save carrying away the main topmast crosstress, in lat 39 20 South, long 36 38 East.  The weather being squally and gloomy, a whirlwind or waterspout was observed on the starboard quarter, about a mile distant, and nearing the ship fast.  Captain Lewis was obliged to haul up to avoid it, and had some difficulty in doing so as it passed within 500 yards of them; it is described as having been a very grand sight, but had rather too much of the terrible in it to be enjoyed by those on board.  Nothing further of note occurred until she was within a few days sail of Port Phillip Heads, when a melancholy accident befell a tine young seaman of the name of George Farquhar; he was up on the main yard and his foot slipping from the rope he lost his hold and falling violently on the deck, died instantly, his head upon which he fell, being dashed to pieces.  The "Cheapside" spoke the "Hartley" off Madeira, 1 week out bound for Adelaide with emigrants.  There were 5 deaths all infants, and 4 births, on board.

The next eight children were born in Victoria, Australia and all recorded on the birth certificate of the last born child, Sarah Jane.

Peter was born in Melbourne in 1849 died 1851 Richmond.
Agnes, my great great grandmother, was born at Heidelberg in 1851 died 1940 Wangaratta
Janet "Jessie" was born at Heidelberg in 1854 died 1928 Stawell
Mary was born at Oakleigh in 1855 and died that same year.
David was born in 1856 died unknown
Euphemia Margaret was born 1859 at Myer's Creek (now Myer's Flat) Nerring near Eaglehawk died 1942 Stawell.
John Robert was born 1862 at Peg Leg, near Eaglehawk died 1914 Wagga Wagga
Sarah Jane was born 1865 at Myer's Creek died 1891 East Melbourne

According to a book written by their great grandson, George Rathbone, the Mason's were for a time at the Ballarat gold fields and their made friends with the Rathbone family.  None of the friends had any great gold finds, only sufficient to satisfy their needs.  He states that the Mason's were in Talbot in 1868 where their daughter Agnes married Peter Hart in 1870.

Nothing further appears to be known of their whereabouts.  A search for Peter Webster Mason's death led fellow family researcher, Linda Robertson, to him dying at Bendigo Benevolent Asylum on the 1st of March 1892 of  Cystitis, Exhaustion and Senile debility.

Today I finally found at least a funeral notice for him in Trove so now I know where he is buried. 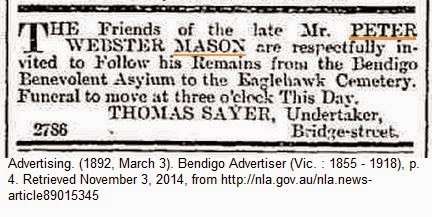 To date no one has found a death for his wife Margaret.

A lot of people have listed her death as 1905 at Hamilton in Victoria but I have that death certificate and it belongs to a Margaret Mason who was born in Co. Clare Ireland, had three marriages, one to a William Mason and had one son Thomas, not ours.

I have seen 14 family trees in ancestry.com with that death mistakenly attached to our Margaret
(And frustratingly there are a couple of other trees that even have Margaret attached to a completely wrong family. Unfortunately this happens repeatedly in that site)