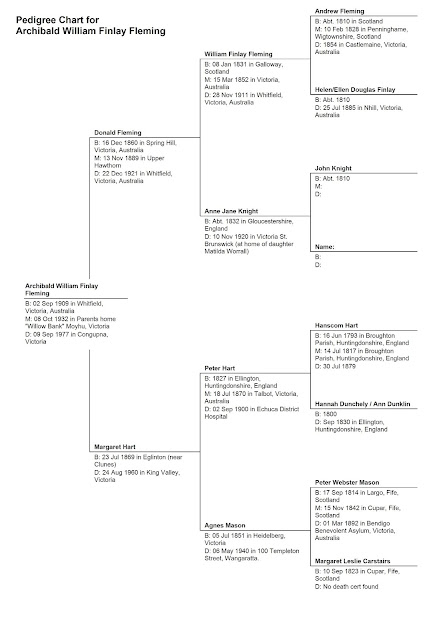 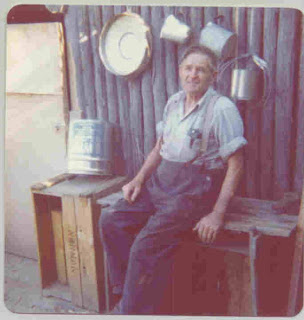 This is how I best remember my maternal grandfather, "Gramp" Archie Fleming, tinkering in his shed.
He used to tell tall stories and I would listen, totally enthralled ... as I got a bit older I started to realize that these stories were a bit far fetched ..... but I loved them anyway.
The sad thing is I can't remember them now.
I do remember bits of one where he told something about hundreds of cockatoos perching on a dead tree and when the farmer fired off his shotgun they all took flight at once and took the tree with them.

I used to love going to Nana and Gramps for school holidays.  They seemed to move around a lot.  They lived for a time at Edi Upper in Northern Victoria.  I'm not sure what Gramp did for a living there.  I took this photo at Edi Upper in about 1974 or 5 I think.

I fondly remember long drives from Shepparton to Melbourne (no freeways then), sometimes towing a caravan, and coming over Pretty Sally  at night to see the lights of Melbourne in front of us.  I loved the years he was a greenskeeper at the Northern Golf Club at Glenroy, Victoria and they lived in the "house" upstairs above the Clubrooms.

I have fond memories of Gramp taking us "rabbiting" even though I was so scared of his ferrets and their sharp sharp teeth but they were tucked away safely in the ferret boxes he made that had big straps so he could sling them over his shoulder for the long walks over the hills.

In his 60s Gramp ended up with diabetes.  He had a corn or callous on his foot that a chiropodist cut back but because of the diabetes his foot never healed and gangrene set it.  The foot was amputated but the gangrene spread further into the leg.  Eventually they took it off at the knee.  I'm not sure if it was a front for us kids but Gramp was always very brave and always jocular about his "stump" as he called it. He couldn't wait to get his new "wooden" leg.  The leg was finally made and fitted and he was learning to walk with not too many problems.  He even had his HR Holden modified so he could still drive it.

I'm pretty sure it was only months later that I was called out of my class at the local TAFE college to be met by my Auntie with the horrible news that Gramp had just suffered a major heart attack and died at home that morning.  He was only 68 years old.