I have been extremely lucky over my years of research in having found or been given some fantastic photos of ancestors and family members.

To those many people who have shared photos with me over the years, I can't thank you enough.

Today I happened to notice in the pedigree view of my family tree that in my first four generations I am missing photos of only three of my ancestors. 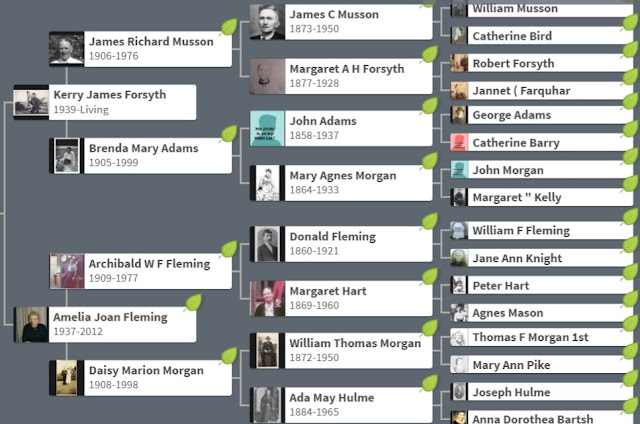 So I made up a wish list image in the hope that one day the universe may smile on me and fill in these blanks on my paternal side.

Posted by Kerryn Taylor at 2:31 pm No comments:

Stanley Raymond Tuckett was born on the 8th of March 1919 in Kensington, Victoria, Australia.

He was the second eldest son of Ambrose Percival Tuckett and Violet Maude Gibb.

Stanley married Hazel Stephens on the 14th of August 1939 at Collingwood, Victoria.

He was a painter and decorator.


Stanley served in the Citizens Military Forces from the 26th of March until the 20th of October 1942.

Stanley enlisted and served with the Australian Army Ordnance Corps.
He served in the Army from the 21st of October, 1942 until the 1st of February, 1946.

At the time of enlistment Stanley and Hazel were living at 2 Kiewa St, Clifton Hill, Victoria.
Sadly, in 1943, their firstborn son Raymond Lyle Tuckett passed away aged only 9 months.

At some stage during his war service, Stanley contracted Malaria and suffered relapses throughout the rest of his life.

Stanley and Hazel went on to have a daughter and another son during the war.

In early 1946 Stanley was transferred to the Camp Pell leave and transit depot at Royal Park, Parkville for discharge.

After the war, Hazel and Stanley had two more daughters.