William James Forsyth was born on the 16th of August 1888 at Coutts Island, Canterbury, New Zealand.
He was my Great Grand Uncle, the second youngest son of my great great grandparents, Robert and Jessie Forsyth (nee Farquhar).
We are yet to find out when and where he died.
William enlisted in the Auckland Military Rifles NZEF on the 15th of June 1915.  He was single and 27 years of age.  Next of kin was his mother, Mrs Forsyth, widow, of  Waitoa.

On the 3rd of October 1915 William was posted as a trooper to the Auckland Mounted Rifles at Mudros and in early November he was admitted to hospital with Typhoid.  This must have affected his health as from that time he spent many of the coming months in various hospitals.  They embarked to Alexandria on the H.S. Delta on the 27th of December where William was admitted to hospital again on the 28th with enteritis and transferred to the NZ general hospital at Cairo on the 24th of January.  From there he went on to a convalescent camp in February then back to the hospital at Cairo.  On the 15th of March, he was admitted to a convalescent home at Heliopolis, a suburb of Cairo and was finally discharged to duty on the 29th of March 1916.
On the 16th of April 1916, he was posted to the Mounted Rifles Training Regiment and then on to the second infantry brigade at Tel-el-Kebir on the 2nd of May.  From there he proceeded to France where some time was spent at Ètaples training depot before joining the 2nd Battalion, 4th Coy of the Otago Regiment on the 27th of June 1916 at Houplines.
At the end of July William had to forfeit 7 days full pay for falling out from a parade without permission!
Nothing further was written on his record for ten months.
In France he was wounded in action, suffering a gunshot wound to the left shoulder on the 26th of May 1917.  He was evacuated to hospital on the 28th.  The 10th of June that year saw him sent to England and various convalescent hospitals over the next 5 months.  During that period he apparently overstayed leave.  One record says he had to forfeit ten days pay,  another says one days pay.

On the 30th of November 1917, he was attached to the NZ command depot at Codford.
It is mentioned that he took a railway journey from Aberdeen to Fraserburgh.  William had relatives there, had he gone to visit them?
Again from January to June 1918, he was in and out of the hospital.  June 1918 found him at Sling and then by the end of that year he was back at Codford.
In January 1919 William went A.W.L (absent without leave) and had to forfeit 28 days pay, did 28 days detention and another 48 days pay RW, whatever that means.
On the 18th of March 1919, he embarked for New Zealand per Tainui.  William was discharged on the 28th of May 1919.

In January 1920 William was employed in the medal engraving section and promoted to Corporal.
On the 14th of July 1921, he was discharged.  We have yet to find further information on William Forsyth.
sources – Auckland War Memorial Museum Cenotaph Database

Tribute page for our Servicemen
Posted by Kerryn Taylor at 2:18 pm 2 comments:

Over the last few days, FamilyTreeDNA has been showing a few new matches in my results.
Many of those are quite small matches, so would be very distant cousins but one, in particular, showed a range of 2nd - 4th cousin with 87 shared centimorgans, the longest block being 29.
This was amongst my highest matches so I felt it would be fairly significant.
I sent an email and received a reply from Jen who said she had done the test mainly out of curiosity about her ethnic origins and that she knew very little about family history research, so didn't feel she could offer much help as to where we connected.

I explained we could be 3rd cousins and asked if she could let me know any of her family surnames.

She replied with 5 surnames, 2 of them being JACKSON and BELL.
I went to my family tree program and Bingo!
I found that a maternal great-grand-aunt, Rose May HART had married John Thomas BELL in 1913.

Rose May HART, born in 1889 at Echuca, Victoria, was a younger sister of my great grandmother, Margaret FLEMING nee HART.  They were daughters of Agnes nee MASON and Peter HART.

Amelia Agnes BELL had married Charles JACKSON and they were Jen's paternal grandparents!
Sadly Amelia had died in childbirth so her son never knew her but Jen says he remembers the HART surname.

I look forward to meeting Jen and her Dad sometime later this year.

FTDNA's "In common with" tool and chromosome browser produced 2 other matches on the same chromosome as Jen although probably further back. (I have privatised the results in the screenshot below)

The 2 other matches are American and on contact with their kit administrator, I was told their ancestors had all been in the United States since the 1800s.

A bit of a mystery somewhere it seems. 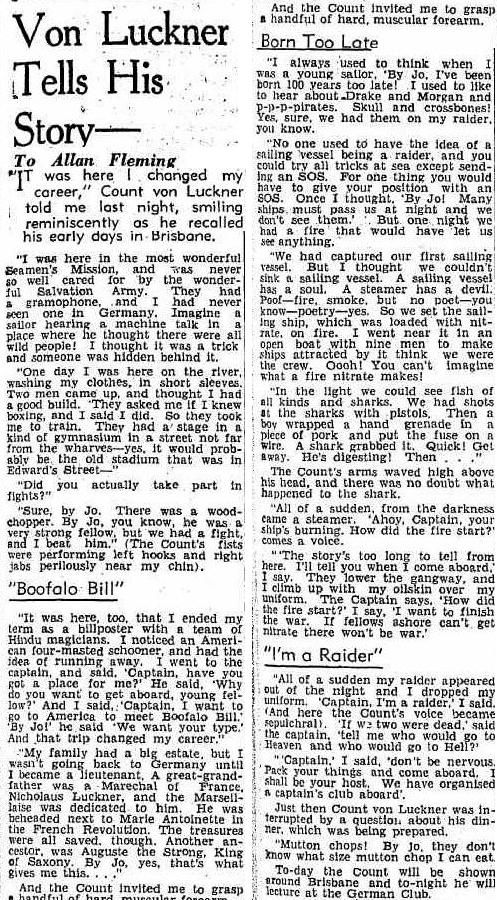 Jack-of-all-trades (from Wikipedia)
Arriving at Fremantle, Western Australia, Luckner jumped ship and for seven years worked in a bewildering array of occupations: he was a seller of the Salvation Army's The War Cry; an assistant lighthouse keeper at the Cape Leeuwin Lighthouse in Augusta, Western Australia, a job he abandoned when he was discovered with his hotelkeeper's daughter by her father; a kangaroo hunter; a circus worker; a professional boxer (due to his exceptional strength); a fisherman......... read more at Wikipedia

Allan Fleming, a first cousin of my mother, was, amongst other occupations, a journalist for the Brisbane Courier Mail.

Before his retirement, Allan FLEMING was appointed to take care of V.I.P security. 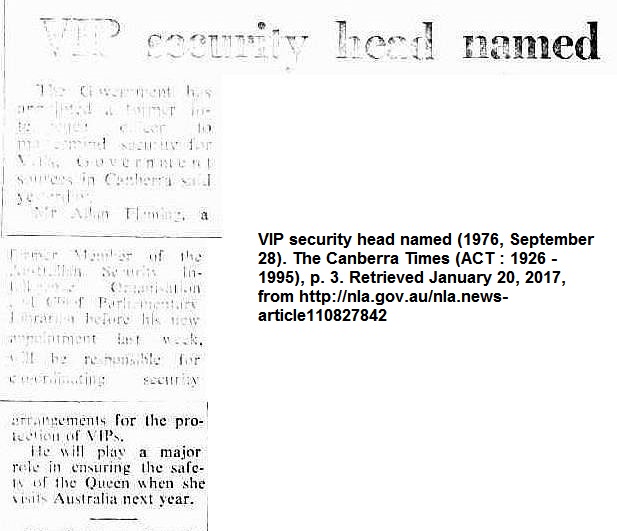 The Government has appointed a former intelligence officer to mastermind security for VIPs, Government sources in Canberra said yesterday.
Mr Allan Fleming, a former Member of the Australian Security Intelligence Organisation and Chief Parliamentary Librarian before his new appointment last week, will be responsible for co-ordinating security
arrangements for the protection of VIPs.
He will play a major role in ensuring the safety of the Queen when she visits Australia next year.