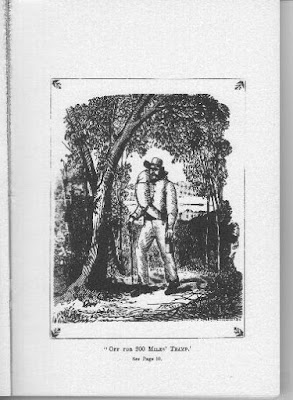 My first night's ”bushing” was a strange experience. Rolled up in blankets, at the foot of a gum tree, I had not turned down long (I cannot say turned in) when I was conscious of something being upon my shoulder, and, cautiously turning round saw an animal perched quite innocently there. It was an opossum. I presume he did not recognise me from a log.
He appeared quite content to sit there until I gave him a can't and sent him some distance off.
This " camping out" is not at all an unpleasant experience, as many might think, and this was a splendid moonlight night. At that time it was far more safe to keep clear of restaurants and shanties as they were the resort of the vilest characters. Neither was it safe to camp out alone with a fire at night, as this was an attraction, and you were pretty sure to get objectionable company. The plan, therefore, generally adopted, was to boil the billy for tea, then, after tea, leave, and go on a little distance in the dark, and turn off the road or track into the silent bush, and roll up in your blankets; thus you avoided unpleasant company. I got through in about seven days. I passed through the famous “Woolshed Diggings," where the rich claims were, and where the men had to wash the gold off their boots when they left work. There was a “ strike'' on just then. The claim_holders wanted to reduce the wages to £I per day.  I was interviewed, and offered work at that price, but of course, I refused, as I was on my way to join my wife's brothers. I then went on through Beechworth – Spring Creek diggings. The scenes on the diggings were strange and novel to me. Beechworth was the chief centre of the mining district, and the other diggings around were named by the distance from Beechworth, thus – “ The One Mile,"  “ The Three Mile," and “The Nine Mile." This last was my destination. It was also called "Snake Valley," from the  winding course of the creek. It was late in the evening when I arrived, quite dark and pouring rain, and there had been a long rain before, so that the roads in the township were wretched. At the crossings of the creek it was impassable, and was only indicated by side logs, on which I had to crawl. The worst of it was, I had to wander up and down the creek to find my brothers' hut. The storekeepers knew them by sight, but could not say where they lived. I was directed to a large restaurant, about a mile down the creek. There were about 40 diggers, just at tea. I walked up and down between the tables, and I think they were the finest, strongest, and roughest set of men I ever saw. I did not see my brothers, though. Came back, enquired at the police camp, also to no purpose. Over the creek again, when at last I found a butcher who pointed out on the bank, on the other side of the creek, the light shining through the calico top of their hut. He lent me a piece of candle to cross the creek with, and I managed to work my way among the holes and sludge, etc., to the other side. And glad I was to get there, and I was as “wet as a rat," and pretty well tired out. I soon got  “a shift " however, and such a fire as they had never saw before; enough to roast a bullock; at which also I got a good roasting; and after a good supper of beef, damper and tea, soon felt all right. This for my first tramp in Australia.
By Kerryn Taylor - July 13, 2015