Hephzibah Land was born in 1814 in Norfolk, England, the eldest daughter and first born child of Mary Bush and Joseph Land. She was baptised on the 14th of August at Guist, Norfolk.

She married William Clough/Cluff Hulme on the 4 of  March 1841 in St. James, Westminster, London, England.
They had eleven children in 18 years. 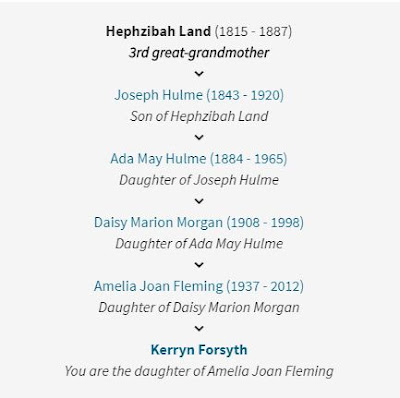 Transcription - On Thursday the last remains of Mrs Hulme, wife of Mr W. Hulme, of Horseshoe Creek, Milawa, were interred in the Oxley General Cemetery. Mrs Hulme was very much respected by a large circle of friends, and at the time of her death had almost reached the allotted "threescore years and ten." The funeral train was attended by a large number of persons, who thus testified to the great respect in which the deceased lady was held, the Rev. A. Macfarlane conducting the funeral

"The cemetery at Milawa is often known as the Oxley Cemetery. It was established in 1864, after considerable discussion about a suitable site. It was expanded in area by approximately two acres towards the west within the first twelve months – Robert Snowdon being the first interment there. The different denominations have their own areas, and all the graves face the east. The cemetery contains a number of European settlers, Aboriginals and Chinese, although the burial places of the Aboriginals and Chinese are not known, many early records having been lost, damaged or destroyed.” from Memories of Oxley, p. 46
Posted by Kerryn Taylor at 12:30 am No comments:

Jackie is my 4th cousin once removed and has shared with me some wonderful photos of the Bible that once belonged to my 3 x Great-Grandmother, Mary BIRD nee KELLAM. 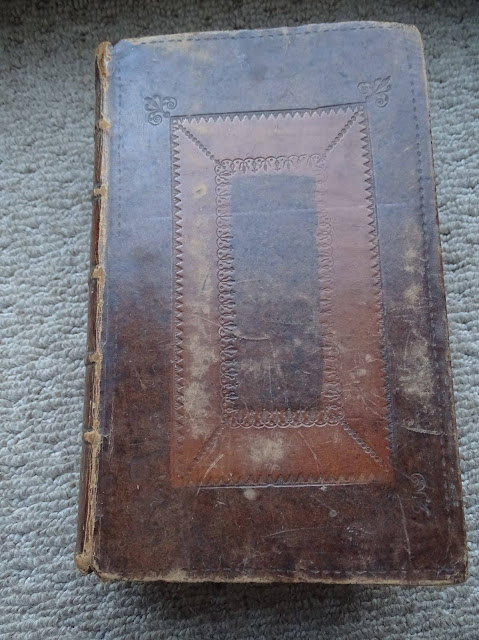 The Bible has been kept safe all these years by members of the KELLAM family. 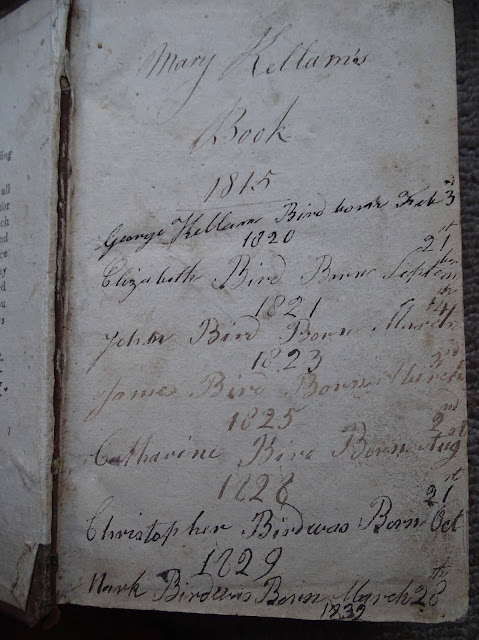 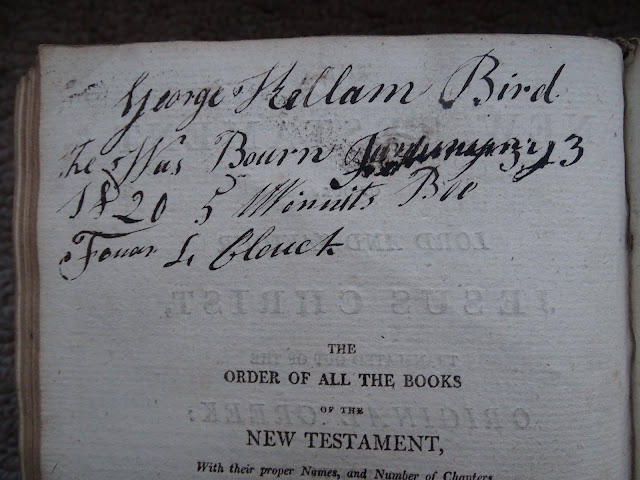 We had a discussion in Facebook about the transcription of the writing and it was agreed that it read "George Kellam Bird
He was Bourn (born) February 3 1820 (Month unreadable but gleaned from parish records)
5 Minnits Bee Four 4 Clouck (5 minutes before 4 o'clock)."

Jackie said that most of the village of Waltham on the Wolds had belonged to The Duke of Rutland and villagers were renting from him. The houses in the village were sold off to cover tax after WW1 which is when her grandfather purchased the house known as Wheelwrights in Waltham where the family had lived for generations.

Mary and Mark's youngest son Mark BIRD junior went to live with his grandfather George KELLAM after his parents died which is likely where the Bible also went.  Mark also became a Wheelwright.

The list of children has confirmed our genealogy  paper trail research.