My maternal great-great-grandmother, Mary Ann (Marrian/Marion) PIKE was born at River Loddon on the 10th of May 1847, youngest daughter of Isabella nee BEATON and John PIKE. 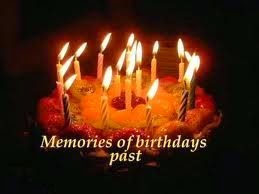 Loddon District covers a wide area and the exact location seems to be unknown, although likely somewhere near the Murray River.

The River Loddon which, after the Goulburn River, is the second longest in Victoria.  It begins near Musk, just East of Daylesford and travels North for nearly 400 kilometres to merge with the Little Murray River around Winlaton near Swan Hill.

Following the death of her father, Mary Ann's mother moved her and her sisters to Euroa.

On the 11th of April 1866, Mary Ann married Thomas Fitzherbert Morgan at Euroa.


Posted by Kerryn Taylor at 1:53 pm No comments: 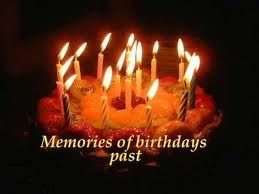 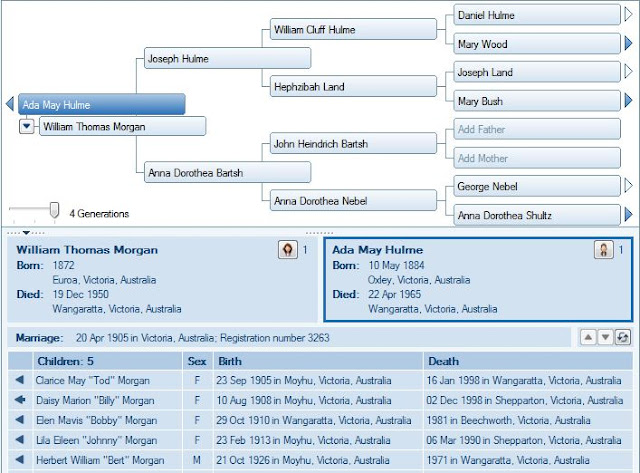 Today is the 134th anniversary of the death of my great-great-grandmother Catherine Adams nee Barry.

My research notes for her are set out below as I dedicate this post to her memory.
I am yet to visit Catherine's resting place where she is buried with her daughter, Mary Adams and a grandson Angus McFadyen at Melbourne General Cemetery in the Roman Catholic area, compartment U, grave no. 71.
I found in June 2012 at www.rootsireland.ie a baptism record is for a Catherine Barry on the 10 March 1831, Parish/District - St. Mary's Co. Limerick. Roman Catholic denomination. Father - John Barry, Mother - Mary Boyle No sponsors or informants.
Thanks to the initial research by Marg Goodwin I learned that Catherine Barry arrived Western Australia on the 13.1.1853 aboard the ship "TRAVANCORE".
Catherine came to Australia by assisted passages under the colonial land and emigration commission, which encouraged the migration of young single women from poor circumstances to help balance the sexes here. There was also an Honora and Mary Ann Barry on the same vessel and it was originally thought they were sisters but with further research, it seems highly unlikely although cannot be ruled out altogether.
The arrival of the ship Travancore was mentioned in the book, THE BRIDE SHIPS by Rica Erickson page 38 - Since the demand in Western Australia for single women was so pressing the Land and Emigration Commissioners had no hesitation in sending Irish girls there. Their haste is evident in the shipping records. Comparison with other documents reveals that false information was sometimes given regarding the number of passengers, their ages, occupations and marital status. The fault lay not only with the agents. Some migrants were known to give misleading information in order to comply with regulations.
During 1853 four large contingents of Irish girls and women came to Western Australia, selected mainly from orphanages and poorhouses of Cork and Dublin. These were shipped to England to board the immigrant ships, the Travancore which arrived at Fremantle in January, the Palestine in April, the Sabrina in June and the Clara in September. These four ships brought over 400 single women (mostly Irish) also about 400 married people with 330 children, and 65 single men. Such crowds of immigrants arriving within nine months were far in excess of Fitzgerald's estimates of the number that the colony could absorb annually. The problems of housing and employment were aggravated by the arrival of four convict ships in the same year. Five cottages in Murray Street leased from Charles King in July 1851 were to be used as lodgings for immigrants when the need arose.
The Travancore arrived in the full heat of Summer.  The 115 Irish girls were taken in parties of forty or fifty up the Swan River to Perth where a large crowd gathered at the William Street jetty to greet them. Some of the girls were barefoot and most of them wore simple gowns with shawls for head coverings. They were soon dubbed "bog Irish" At first the employers were reluctant to take girls who were not trained as cooks, scullery maids or nursemaids, especially when they were Catholic. Protestants naturally preferred Protestant servants to avoid embarrassment in their homes. But the Irish girls were good-natured, healthy, willing to work and were not averse to leaving town and going into service on distant farms. Within a few weeks, ninety of the girls were in employment, some going to Albany and sixteen to Bunbury. By February the Immigration Officer reported with satisfaction that: 'The exemplary good conduct of the Travancore girls while at the Home, and their general willingness to learn quite dispelled any feeling of prejudice against them on account of their Catholic faith'
It is interesting that only 6 days later she married my great-great-grandfather, George Adams at St. Patrick's, Fremantle, Western Australia on the 19th of June 1853.
Witnesses were Thomas GASSEN and Mary WIGAN.

Their first daughter, Susan was born in Fremantle in 1854
George and Catherine moved to North Melbourne, Victoria 2 years later where their next child, son George was born in 1856. Then followed my great-grandfather, John, in 1858, Mary in 1860, Edward in 1862, Catherine (known as Katie) in 1864 and David in 1866.  They were then back in W.A where their last two children, Margaret and Annie were born in Albany in 1868 and 1870. This is most likely when George was involved in building the Albany Courthouse and Customs building.
Others of my blog posts linked to Catherine can be found BY CLICKING HERE
Posted by Kerryn Taylor at 8:41 pm 4 comments: