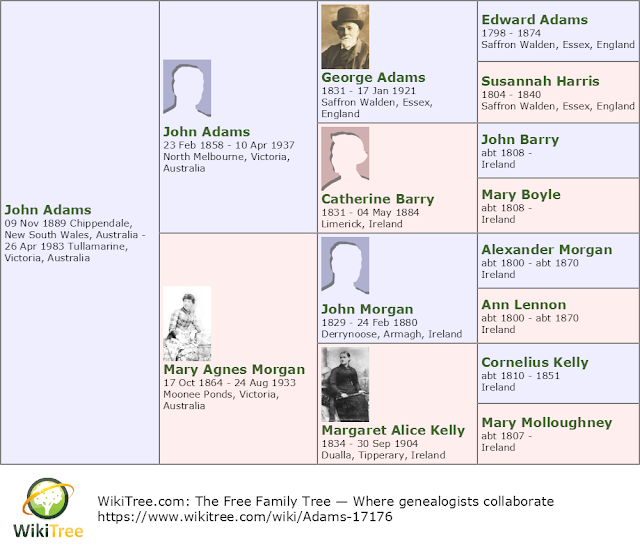 Posted by Kerryn Taylor at 1:26 pm No comments:

Ambrose Percival Tuckett was born the youngest of 7 children in Nathalia, Victoria in March 1894 to parents Thomas George Tuckett and Alice nee Fleming.

On the 1st of March 1916, he married Violet Maude Gibb at Parkville in Victoria.

Ambrose enlisted in the A.I.F. on the 3rd of October 1916 at the age of 22 years and 5 months.  He gave his occupation as Storeman and was married to Violet Tuckett first of 6 Lambeth Street, Kensington and later at 23 Southgate Street, Parkville.

On enlistment, Ambrose was still serving with the Citizen Forces.  He was 5 foot 7 and a half inches tall with a medium complexion, brown hair and brown eyes.  Religious denomination Church of England.

He initially served in A company of the 23rd battalion but within a month was transferred to H company of the 2nd Battalion then into K company and finally to the 24th Battalion just a week before embarkation on the ship 'Hororata' on the 23rd of November 1916.

They arrived at Plymouth, England on the 29th of January 1917.
Five months later he was in France with his battalion which
"took part in its first major offensive around Pozieres and Mouquet Farm in July and August 1917.
The Battalion got little rest during the bleak winter of 1916-17 alternating between the front and labouring tasks. When patrolling no man's land the men of the 24th adopted a unique form of snow camouflage - large white nighties bought in Amiens.
In May 1917 the battalion participated in the successful, but a costly second battle of Bullecourt. It was involved for only a single day ' 3 May ' but suffered almost 80 percent casualties. The AIF's focus for the rest of the year was the Ypres sector in Belgium, and the 24th's major engagement there was the seizure of Broodseinde Ridge."

Ambrose was recorded as "Sick" a casualty on the 22nd of September 1917 later being classified as Shell Shocked.
He had pains all over the body, very shaky hands and couldn't sleep due to the pain.
On the afternoon of the 20th of September, he claimed he was blown over by a shell and felt stunned for a while, very giddy and shaky and was taken to M.O. by Sgt Major.

On the 21st of November, his next of kin were advised he was wounded.

In the next entry, it says he was admitted to 1st Southern General Hospital at Stourbridge with Severe shell shock on the 15th of December 1917.

His next of kin were advised on the 27th of February, 1918 that he was returning to Australia.

Returned to Australia from England per "Dunluce Castle" on the 24th of January 1918.
Discharged 30th of April 1918.

Ambrose went on to have 4 children with Violet.
He later married Harriet Jessie Cayzer nee Albon in 1945 and they also had 4 children.

Ambrose Percival Tuckett died of Myocardial infarction at Leongatha on the 14th of June 1958.  He is buried in the Leongatha cemetery.
Posted by Kerryn Taylor at 8:28 pm No comments:

I have been trying to find my grandmother's paternal Uncle for so many years now I can't remember how long.

David Adams, whose death details we couldn't find, was the only child of George Adams and Catherine Barry whose death and further life movements we hadn't found.

Christine Stafford nee Adams, my 3rd cousin once removed and I had all but given up hope but every few years a small snippet of information would show up in searches just to tease us I'm sure.

After his birth registration details in 1866, the next bit of information on his whereabouts was that he was a witness to the marriage of my great-grandmother Mary Agnes Morgan to his older brother, John Adams in  Essendon, Victoria in 1887.

Christine had later found some newspaper articles that mentioned a young David Adams in the Flemington area of Victoria where our Adams ancestors lived.
We still don't know for sure if this was our David though.

David's father, George Adams, died in 1921.
David was one of the beneficiaries in his Will.


He was also a beneficiary in the Will of one of his sisters, Margaret Mansfield in 1926, so we knew he must have been still alive.

The last hint was nearly 12 months ago when I came across an obituary for David's sister, Catherine McFadyen who died in 1946, that mentioned her brother, David Adams in Sydney.


Yesterday a new record hint in ancestry.com.au came up for him.

A marriage was recorded in The Sydney, Australia, Anglican Parish Registers, 1814-2011 which had been added to ancestry. (I'm not sure when)

This record actually showed a marriage certificate for a David Adams to an Evelyn Maude Sutton in 1938.  I thought Nah ......

His age was 71 years and he was a builder who lived in Sydney.
Well that occupation ran in the family but I had previously found another death for a David Adams, builder so I wasn't convinced.

Born in North Melbourne, Victoria, tick.
He was a Widower which would explain his age, tick.
The big YES came at his parent's names, George Adams, builder and Catherine Barry.

It took a while to sink in but you can imagine the happy dance!
After all these years I couldn't believe he had been found.

I had actually looked at the marriage record previously for these two but due to financial restraints, I can't spend willy-nilly on BMD certificates.

Chris Goopy, a genealogy blogging friend, once said David would help us find him when he was ready.

I hooked up with my cousin Christine in messenger and we both began a frantic search for other information.

In the excitement, I can't remember now who found what but we found his death and funeral notices in April 1951.

I haven't found David Bernard Adams death as yet but we are fairly sure he married a Maisie Lilian Belcher.

On looking in ancestry there doesn't seem to be any of his descendants researching or as obsessed interested in the family history as I am.